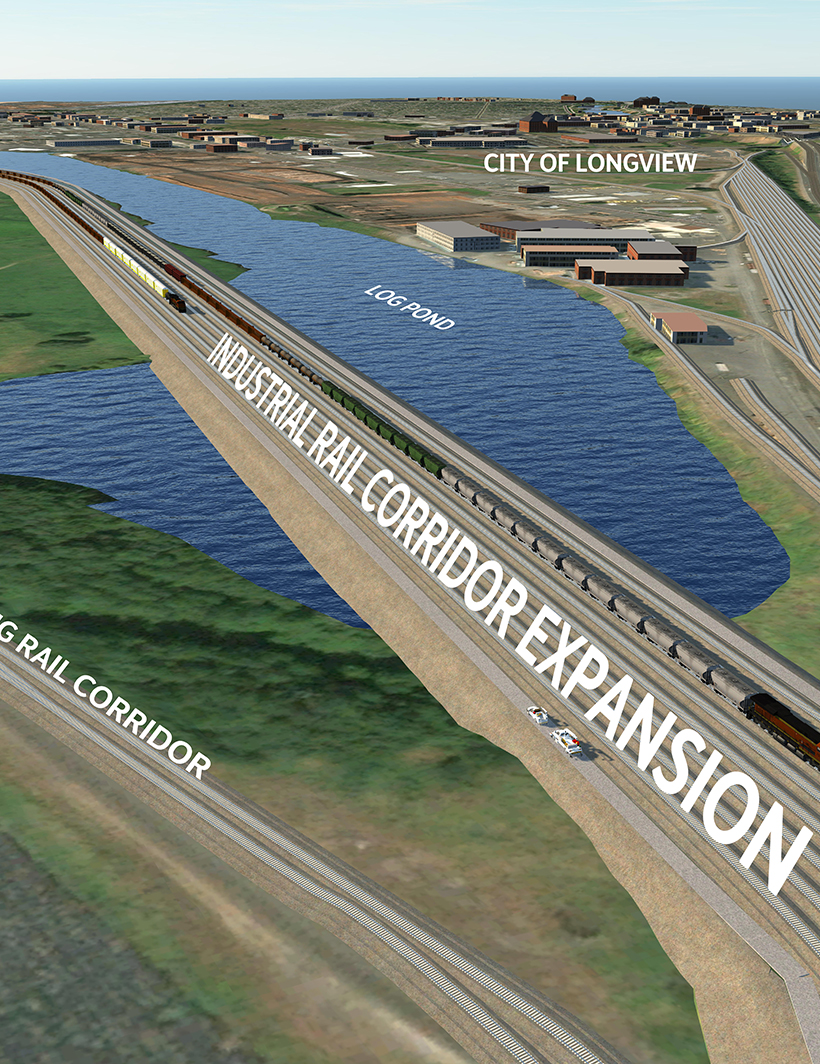 Through the on-call contract between KPFF and the Port of Longview since 2013, KPFF is currently providing prime consulting services for the planning and design of an expanded rail corridor to provide unit train service to the Port of Longview and its industrial clients. The IRCE will provide eight tracks, each with a clear length of 8,500 feet or more, and will support direct arrival and departure of trains by BNSF and UPRR. The IRCE connects directly to Longview Switching Company’s railyard which is a facility jointly owned by the railroads and is being designed in close collaboration with operating and engineering staff from both railroads. Approximately 60% of the IRCE footprint will be constructed in or adjacent to a large log holding pond and associated wetlands, requiring extensive in-water fills.

The multi-phased project is currently at the 30% design stage and developing permit documents for federal, state and local jurisdictional review. Most of the project will be constructed on land not currently owned by the Port and includes property acquisition processes with multiple surrounding landowners. The Port is working to obtain federal grants to fund the project. The project will meet or exceed federal standards for track construction and KPFF anticipates providing assistance in meeting administrative requirements for federal grant funding. The IRCE is planning to break ground in 2022-2025 once funding, permitting, and land acquisition is secured.

As KPFF and the Port advanced design of the IRCE, the Port worked to market the project and entertain interest from other customers wishing to develop on unused or under-utilized terminals. The Port recognized the need to better study current and future rail and vehicle traffic at the Port. The Port of Longview selected KPFF to perform a detailed analysis of rail and motor vehicle movement through the Port, accounting for forecast growth in rail traffic volume and planned rail improvements. KPFF also developed recommendations on how to mitigate or limit impacts to customers, tenants, adjacent industrial properties, and local and state roadways.

KPFF’s analysis included development of rail operating plans, static modeling and dynamic modeling for multiple future operating scenarios in the Port, taking into account the planned expansion of the industrial rail corridor from a two-track corridor to an eight-track corridor, as well as two potential unit train served facilities.

The Port of Longview has been working on the Industrial Rail Corridor Expansion (IRCE) since 2014. In 2018, the Port transitioned the IRCE project to KPFF. The KPFF team, and specifically project manager Bekah Osterhaus, and Steve Kingsley, were able to seamlessly move the project forward without much delay. KPFF’s rail expertise and relationships with BNSF and Longview Switching Company (jointly owned by UPPR and BNSF) have been invaluable. Their methodical and well documented approach allowed us to make great progress toward this long-term development goal. I would recommend Bekah, Steve, and the KPFF team in developing a port rail design project.

Director of Planning and Environmental Services
Port of Longview