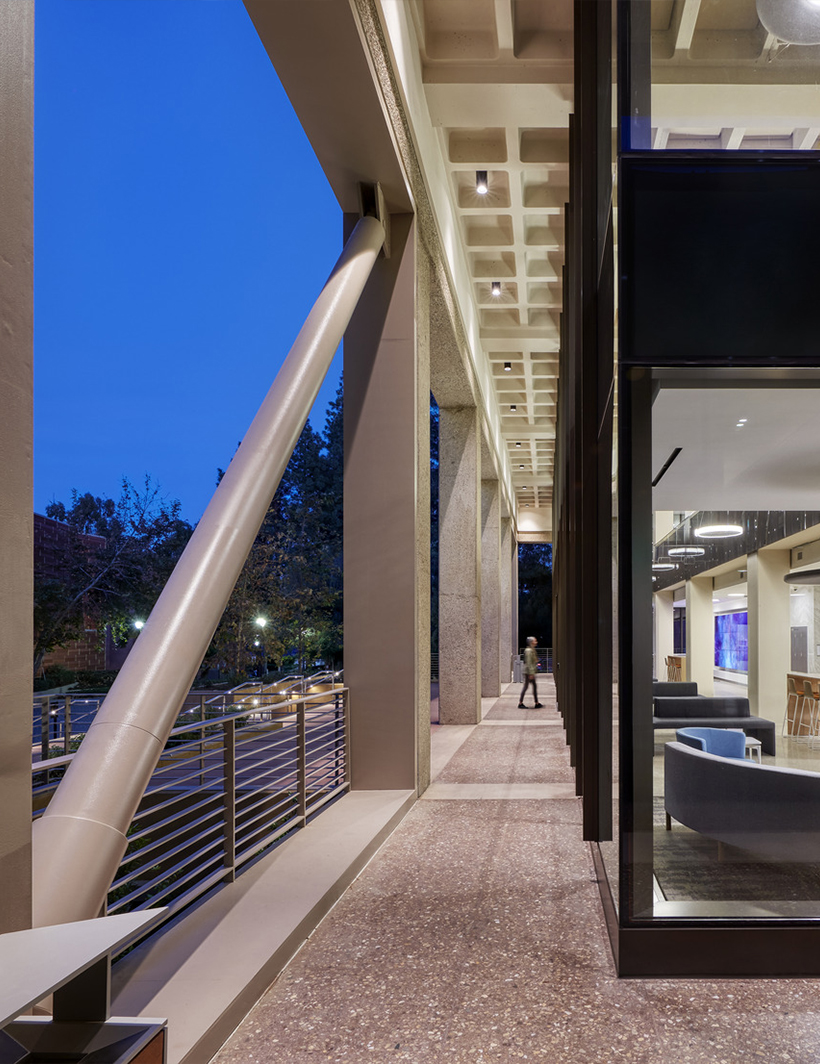 Applications of Viscous Fluid Dampers to a Non-Ductile Concrete Structure

In 1965 UCLA completed construction on the Paul Revere Williams designed Pritzker Hall, a non-ductile concrete structure, to house an extension of the Psychology Department. The hall is an 8 story building, with three additional levels of basement below grade that link to two other buildings seamlessly to create a larger Psychiatry complex. The lack of ductile detailing of the perimeter frames above the 3rd level was identified as a seismic deficiency by a report created to fulfill the UC Seismic Safety Policy. The building deficiency is related to the same issues identified in the City of Los Angeles Non-Ductile Concrete Ordinance, which requires retrofitting to bring to an appropriate level of life safety.

The building architecture lent itself to a unique retrofit solution that included advanced analysis and laboratory testing to prove out a concept using viscous fluid dampers. The long spans and large open bays on the first floor gave our engineering team the opportunity to seek alternative retrofit methods including installing discrete viscous damping elements to lessen the seismic demands transmitted up to the non-ductile columns making up the façade above. Traditionally retrofits include column and beam strengthening as well as new connections between floors and walls that overlay on top of existing structural elements. These methods are costly, time consuming and often change the character of a building. With the fluid viscous dampers, KPFF was able to minimize the impact on the architectural intent as well as drastically reducing the construction cost and schedule.

To prove the retrofit concept, KPFF worked with the engineering department at UCLA itself to conduct component testing in a laboratory setting. The research team recreated key portions of the existing structure within the lab where key structural components were subjected to simulated seismic loading experiments. The testing allowed the engineering team to gain better insights to how the building reacts to seismic loading in as-built conditions.

The nonlinear dynamic procedure in ASCE 41 was used to determine the code requirements for this retrofit. Using parametric studies, the engineering team used the information gleaned from component testing as well as ground motion reports to optimize the supplemental damping system. The critical building behavior occurred in the non-ductile concrete columns above the 3rd floor, and therefore the retrofit was tailored to modulate the seismic actions on these elements so they remained safely within the limits determined by the testing program.

The minimally invasive retrofit will leave the architectural integrity of Pritzker Hall intact, while allowing our partners, CO Architects, the opportunity to upgrade and refresh the building with thoughtfully designed interiors reflecting the needs of today’s students and faculty. The first phase of construction currently underway includes outfitting the viscous dampers on the upper floors of the building. The second phase of construction will include additional viscous dampers on the first floor as well as the renovation of the interior of the tower.