Renovation and Retrofit of 100 Stockton Street: Transforming an Introvert into an Extrovert 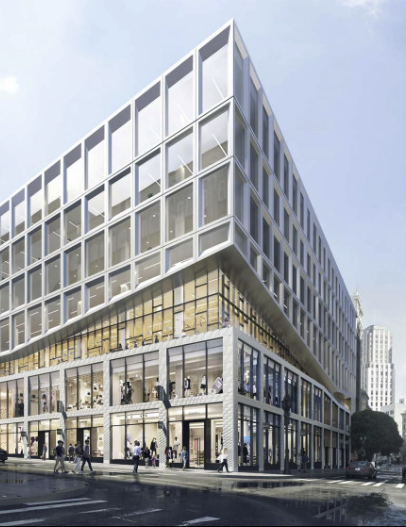 Standing seven stories tall, with a Brutalist aesthetic and an aging facade, 100 Stockton in San Francisco (or Macy’s Mens) was originally designed for a single retail tenant in the early 1970s in a time when solid walls were acceptable and natural light was sometimes an afterthought. Rather than tear down this historic structure the developers tasked the design team with transforming this introverted, dated building into an extroverted, light-filled jewelbox.

The overall project vision is to reshape 100 Stockton into a mix of retail and office space as well as add a rooftop restaurant and a wrapped outdoor terrace at the third floor. The engineering systems play a large role in this vision, so Lead Architect, Gensler collaborated with KPFF to explore options for both the site and building civil engineering and the complex structural systems required to give this Union Square icon a new life.

The work not only changed the building’s appearance and functionality but elevated the skills and confidence of several budding engineers.

Our structural team rapidly assessed over forty possible schemes, including interior cores and exoskeletons of various configurations. Creating this rapid response team during conceptual design encouraged creative solutions and ensured that the path taken throughout design was one that delivered a renovation and retrofit consistent with the developer’s expectations.

Associate and Structural Engineer Nick Miley shared “working on 100 Stockton was a whirlwind at first. Our team had to respond to new tenant layouts and client feedback while evaluating a complex tangle of structural constraints. I was one of four engineers tackling the analysis challenge. We learned to work collaboratively and build on each other’s ideas – no idea was too crazy to be considered. This process taught me how to think about design options with the client’s objectives in mind and the importance of letting go of my preferred option in favor of new ideas that benefit everyone. Working on this project from design through construction has been a challenging but extremely rewarding experience that has shaped the trajectory of my career.”

“Being located close to our client and design team members allowed us to interact quickly and easily. Whether it was reacting to unforeseen conditions or coordinating with a massive and on-going public infrastructure project, we were able to develop solutions in a timely manner to keep the design and construction process moving. The time spent together early has built a level of trust and understanding that has grown throughout the project.” Ryan Beaton, PE,  Associate, Civil Engineer

A project this complicated has a list of unknown conditions and lessons learned too numerous to mention. One of the keys to the team’s success was to avoid the standard “problem finding”mentality in favor of a solutions-based, collaborative mindset.

Read more about this project in the March 2022 issue of Structure Magazine.

Inspired by the ACE Mentor Program