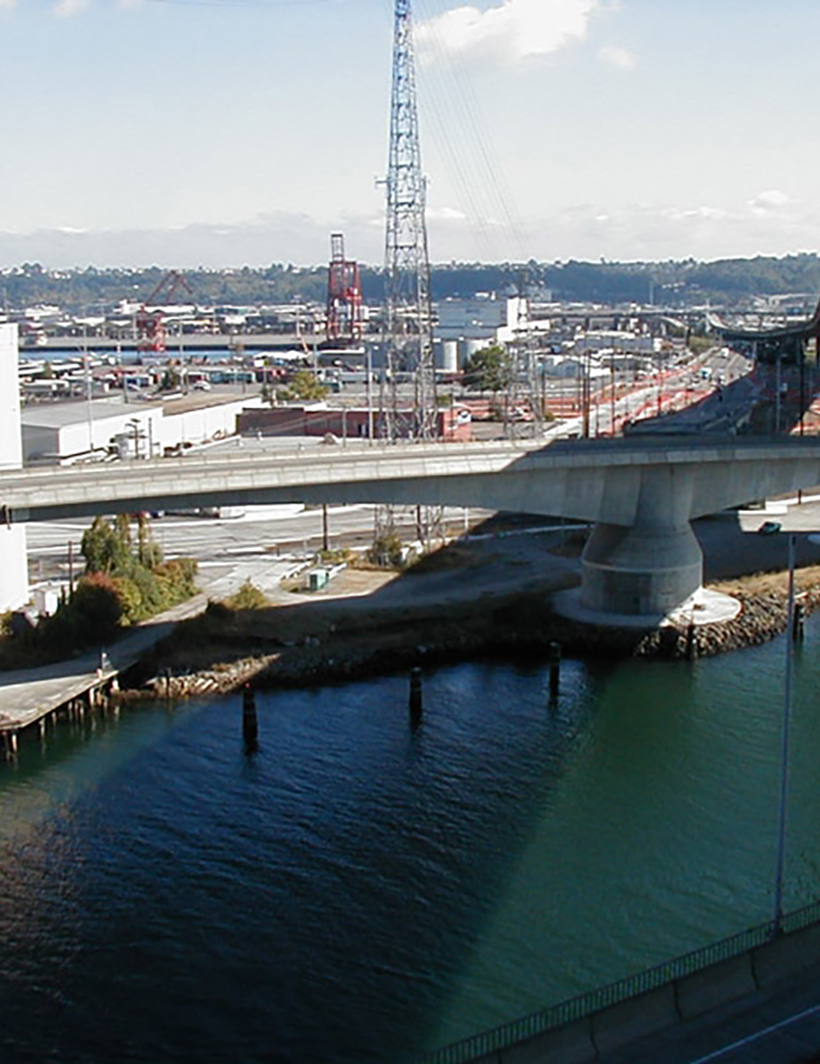 The Spokane Street Swing Bridge in Seattle is a unique concrete box girder design which at 7,500 tons per leaf, it is one of the heaviest movable bridges in the world. To make it practical to carry this immense weight, the original bridge designers developed an innovative 103-inch bore, 5 inch stroke “floating barrel” lift / turn hydraulic cylinder. In 2001, after one of the lift/turn cylinder barrels failed after only ten years in service; a spare cylinder was installed to keep the bridge in service and the Seattle Department of Transportation (SDOT) immediately assembled a team to perform a forensic analysis. Their findings indicated that a fatigue type failure had initiated at a manufacturing flaw and propagated rapidly due to poor material qualities and localized high stresses. The City placed a high degree of urgency on determining the cause of failure and correcting the problem, dictating that the design and construction of the two replacement cylinders could not take longer than 24 months after selection of designers. By a competitive selection process, SDOT retained a team with KPFF as lead machinery design consultant, and tasked us with confirming the cause of failure and providing a corrective design that would preclude similar failures in the future. To meet the requirement for a nominal 100 year life, while retaining and reusing as much of the original machinery as possible (see photo featured to the left, for cylinder replacement), KPFF developed a high strength forged steel barrel with a shrink-fit bronze liner to eliminate the potential for undetected manufacturing flaws that had caused the original design to fail. Advanced 3D Finite Element Analysis was used to predict cylinder stresses and deflections under load, and also enabled minor modification of manufacturing processes to eliminate stress “hot spots” caused by stress risers, or sharp corners. KPFF worked closely with SDOT’s contracting office to enable advanced involvement of pre-qualified contractors to provide constructibility input to the design and to greatly reduce the construction bid period. City of Seattle DOT Spokane Street Swing Bridge controls and communication design upgrade. AIA provided plans to upgrade the electrical systems on the swing bridge in conformance with recommendations of the electrical and mechanical report, these were (1) communications replacement design and (2) control system upgrade design. Both designs required ongoing coordination with the client’s maintenance and operations personnel to ensure that needs and preferences were incorporated into the plans. Specific pitfalls were identified and each of these pitfalls was addressed and minimized.