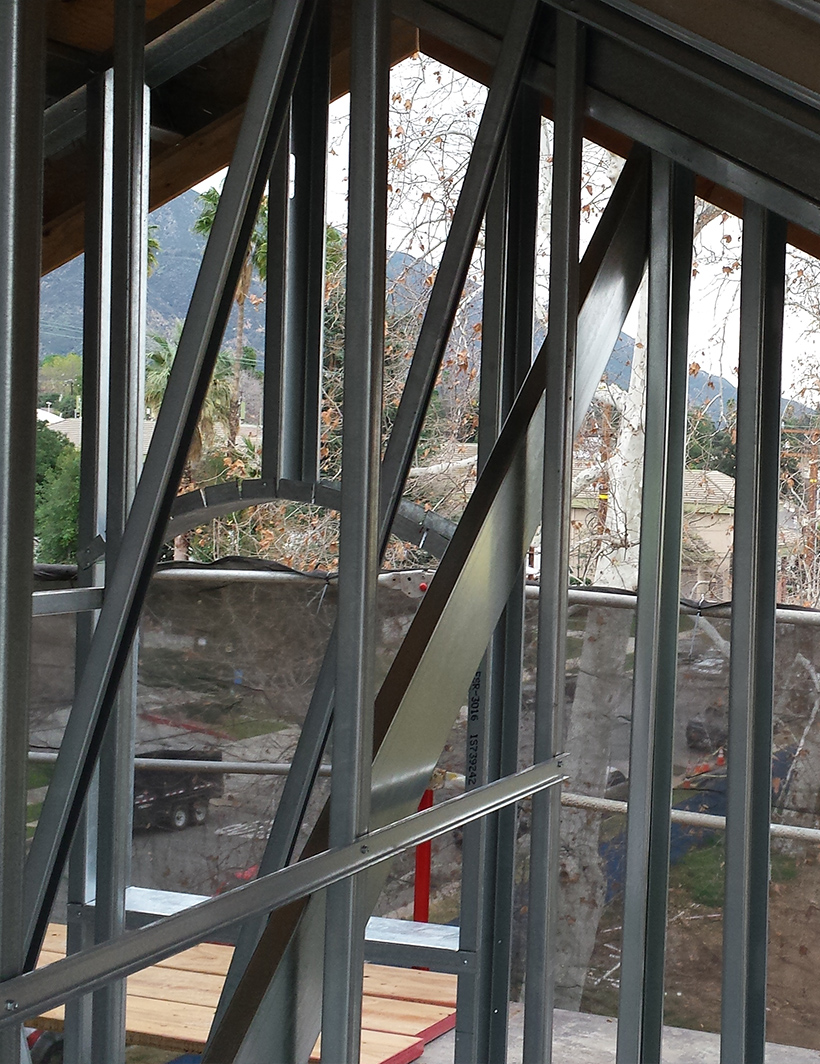 My 14-month old son and I sit at our workspace – our living room floor – contemplating our next Lego-structure feat. I am uncertain if he shares my heightened level of excitement as I stare at the heap of pieces: their diverse features, their flexibility of use, and most importantly, the precision with which they are crafted. Oh, the endless possibilities!

As I cajole him to share my enthusiasm, my mind wanders off to a relevant and relatively distant event in time – 24 months ago to be exact. Digital Building Components (DBC) ventured to build a plant somewhere in the United States to prefabricate cold-formed steel (CFS) structures and asked KPFF to partner with them as their structural engineer. Admittedly, we were not completely certain of all that this would require and where it could lead. We had recently completed a $105M, 350,000-SF senior housing project in Altadena, California that included five prefabricated CFS buildings; it was all very new and thrilling, but not without its challenges. Yet, in staying true to the KPFF way, we Ready, Fired, Aimed- and jumped at the opportunity with DBC.

Let’s face it – we live in a prefabricated world. Look around: the desk, the computer, the cell phone, the coffee-maker, all have prefabricated elements. A bit more arcane is the prefabricated building (sometimes called manufactured buildings) which has been around for decades; however, the way in which these structures are conceived of, detailed, assembled, QA/QC’d, and erected today is very different. This “next generation” prefab building is reaping the rewards of significant technological advancements in CNC, BIM, and Robotics made in the last 10 or so years– all of which are employed by DBC (I liken it to comparing the Henry Ford assembly line of the 1920s to what their manufacturing plants looks like today). Along with such sophistication is an immense amount of upfront and meticulous design and coordination, all delivered through a Design-Build framework between KPFF, DBC, GC, and the A-E team. We have quickly learned that successful prefabrication requires a reshaped design process that is more aligned with that of product manufacturing. Early involvement of all stakeholders, designers, and contractors is paramount. No detail is too small and nothing can be left to chance or “later”. And design speed – it is nothing but essential.

Fast forward to present time. DBC opened a plant in Phoenix, Arizona, and in the last 18 months we have completed designs on:

Let’s just say things have been moving at a humbling, frenetic pace.

Our recent work with DBC has taken us to job sites across the country and we are seeing cold-formed steel prefabrication used more and more for urban building types such as student housing, hotels, multi-family and senior residences. Owners and developers are recognizing the added value of a compressed schedule and the translated cost savings, as well as improved quality of construction. And we are recognizing the benefit of using template details (albeit after months of testing and refinement) that provide for efficient design, consistent structural performance, and ease of assimilation with our partner’s lean construction practices. Our work flow and product is really starting to click.

I come back to staring at the proud smile on my kid’s face as he offers up a perfectly “prefabricated” 3-piece Lego assembly. I marvel at his apparent genius and think of the boundless ways that prefabrication has shaped our world, and how it will continue to do so for generations to come.