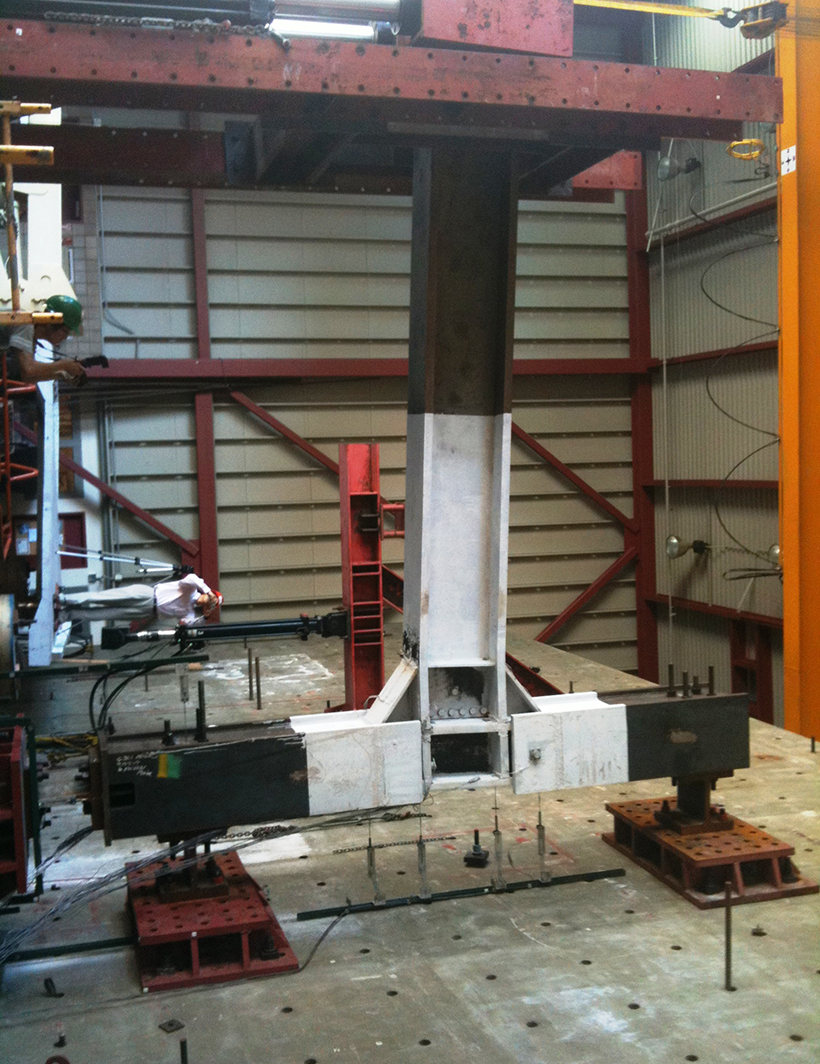 The Sharp Metropolitan campus had two buildings critical to the functionality of the campus that were Structural Performance Category 1 (SPC-1), requiring a seismic retrofit prior to the January 1, 2015 deadline. One building was the Central Tower, a 9-story, 65,000 square foot, Steel Moment Resisting Frame (SMRF) building. The SMRF earthquake lateral force resistance system was designed and constructed to the standards in place prior to the 1994 Northridge earthquake. The fact that the building was designed and constructed to the pre-1994 Northridge standards is significant because the earthquake revealed that buildings with SMRF systems sustained significantly more damage to the earthquake lateral force resistance system than expected. The Central Tower required extensive seismic retrofits of the foundation, diaphragm, SMRF and exterior precast panel skin. The second building was the South Tower, an 8-story, 130,000 square foot reinforced concrete building constructed in the 1960’s. The South Tower required retrofit of the foundation, floor diaphragm and shear walls.

Heightening the difficulty of this undertaking, Sharp Healthcare stipulated that the hospital must be operational throughout all construction phases. In order to offer uninterrupted medical care, advanced analytical techniques and innovative construction procedures were used to implement the seismic retrofit of the towers. The analysis, design and construction effort were supplemented with extensive material and component testing.

For the Central Tower, an advanced non-linear analysis of the SMRF was conducted based on the results of a detailed structural component testing program of the SMRF joints at UCSD. Both the existing moment frame joints and the retrofit joints were tested at UCSD in an OSHPD approved program. The foundations were retrofit with 50ft deep micropiles, and the columns were outfitted with new base connections so that the existing foundations were bypassed to deliver loads from the building frame to the soil below. The existing precast panels needed to be retrofit to provide a slip connection at the top of the panel to allow for unrestricted movement in an earthquake.

For the South Tower, we used a conventional linear analysis of the reinforced concrete shear wall system. The foundations were widened and thickened in limited locations. Shear walls were reinforced with select infills at abandoned openings. Shear walls that needed additional strength were retrofit with carbon fiber mesh adhered to the wall with epoxy. Select columns and areas of the floor diaphragm were also retrofit with carbon fiber epoxy mesh as well.

This design-build retrofit was delivered utilizing bridging documents; as the Prime Consultant KPFF lead the development of these documents. We lead a team of architects, MEP engineers, estimators and contractors to start the retrofit process. At the conclusion of the design phase, KPFF was assigned to the winning construction design-build team by Sharp to maintain consistency with the structural design solutions and testing developed in the bridging documents.