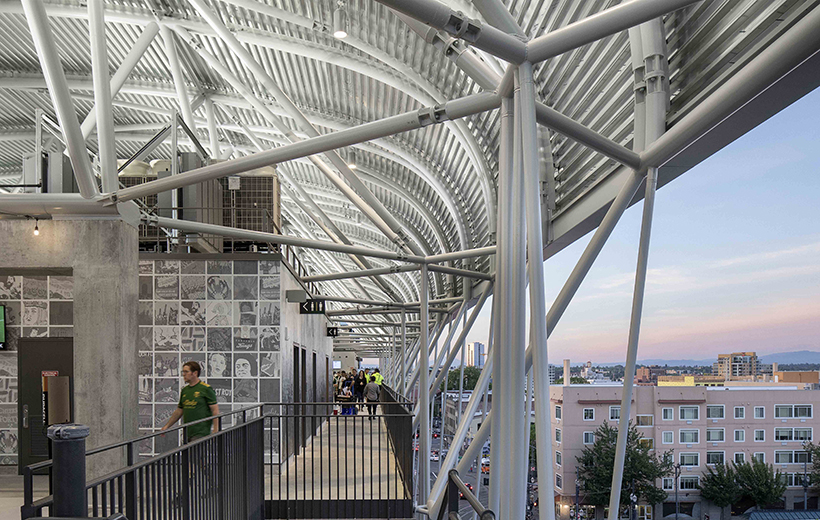 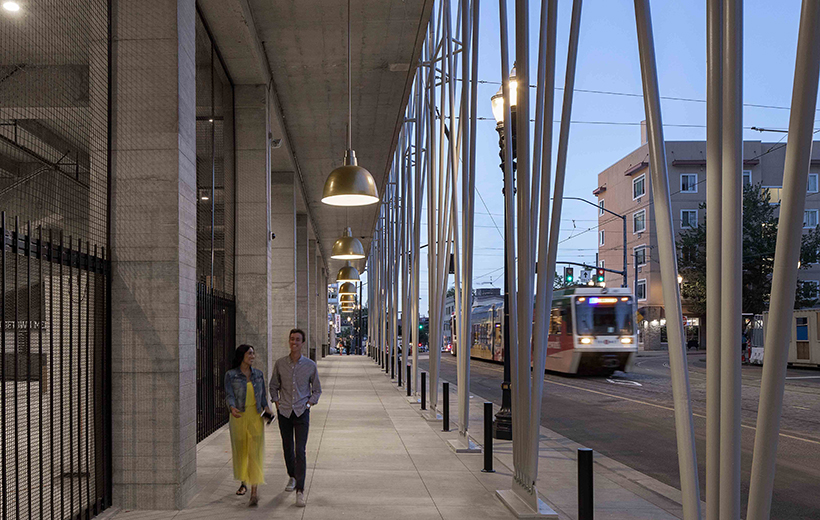 Nested in the historic Goose Hollow neighborhood in southwest Portland, just blocks away from the city’s downtown core, Providence Park stadium is a vital component of Portland’s thriving sports culture. The stadium is home to two professional soccer teams —the Portland Timbers FC, who have had one of the top average attendances in MLS, and the Portland Thorns FC. Originally designed in 1925, the stadium was only partially completed. Since then, it underwent multiple renovations and additions, allowing it to serve as a soccer, football, and minor league baseball stadium at various times.

Beginning in 2016, KPFF provided civil and structural engineering, as well as surveying and 3-D scanning services, for an $85M superstructure remodel — by far the largest and most comprehensive renovation of the stadium. This massive renovation, finished in 2019, completed the vision for the original stadium while also incorporating distinctly modern, open, and transparent design features. Because the stadium is squeezed in a tight urban space, hemmed in by road, utilities, buildings, and a light rail line, the design could not expand in horizontal directions, leaving vertical expansion as the only option. Inspired by public arenas all over the world — from “La Bombonera” in Buenos Aires to London’s’ original globe Theater — the soccer stadium design captures the imagination of global visitors with its atypical stadium structure. The renovated stadium has become iconic, garnering national public acclaim for its unusual design, which piques the curiosity of visitors with its impressive combination of art and science that characterizes the best of the structural engineering profession.

Three new levels with 4,000 new stadium seats sit behind the existing east side seating on vertical tiers, creating a formidable wall of soccer fans when the stadium is filled. The vertical expansion design preserves the intimate fan experience while raising total capacity to approximately 25,000. Once settled into their seats, guests can enjoy improved unobstructed views of the entire soccer pitch. The top level of the addition includes observation decks and an open-air concourse with views of the city.
To protect against inclement weather, a new 150′ cantilever space truss canopy stretches over the entire east side of the stadium, with a lattice of steel that extends down the back side to the sidewalk below, creating a visual hallmark of the expansion. Permitting included provisions for extending the cantilever over the public right-of-way and creating a welcoming street-level concourse.

Allied Works wanted to maintain the rhythm of the original stadium colonnade design along the eastern side, facing downtown Portland. To avoid solid walls, which would obscure views from the street, the project team used a special concrete moment frame seismic force resisting system in both plan directions. To accomplish the Architect’s desired field sightlines and meet the constraints of the schedule, the team cast the concrete raker beams and seating trays off-site and hung them from specially designed connections to the site-cast concrete moment frames. The team modelled each component and its sequencing during construction in 3D so that the contractor could understand the complexity of the connection.The new stadium superstructure is positioned over two stories of existing seating levels that required new columns to be punched through, yet seismically isolated from, the existing floors. Over 200 micro-piles were drilled from the street-level down through the field level. The team used transfer beams at street grade to shift the superstructure loads into practical foundation locations. A structural diaphragm at grade level links the discrete pile caps and transfer beams

The stadium sits on an extremely irregular site in a seismically active region of the Western Hills of Portland. As a public building housing thousands of fans, the stadium required careful attention to safety concerns; the structure needed to be robust and stable, offering adequate strength while supporting a flowing design. To build an accurate model of the site’s complex environment, the KPFF survey team scanned the site using latest 3D scanning technology, and the design team adjusted the stadium expansion design accordingly.

The downtown site allowed little to no staging room. A great number of below ground utility connections for water, sewer, and stormwater services had to be made in interconnected layers under the street. Underneath the playing field surface, KPFF’s civil design for state-of-the-art stormwater management detains the runoff before it is released into the City’s combination sewer system. Stormwater that hits the rest of the park flows into large stormwater detention chambers installed beneath the park. This carefully designed system protects the historic Tanner Creek Sewer running beneath the stadium.