% of stormwater treated on site

tons of material diverted from the landfill 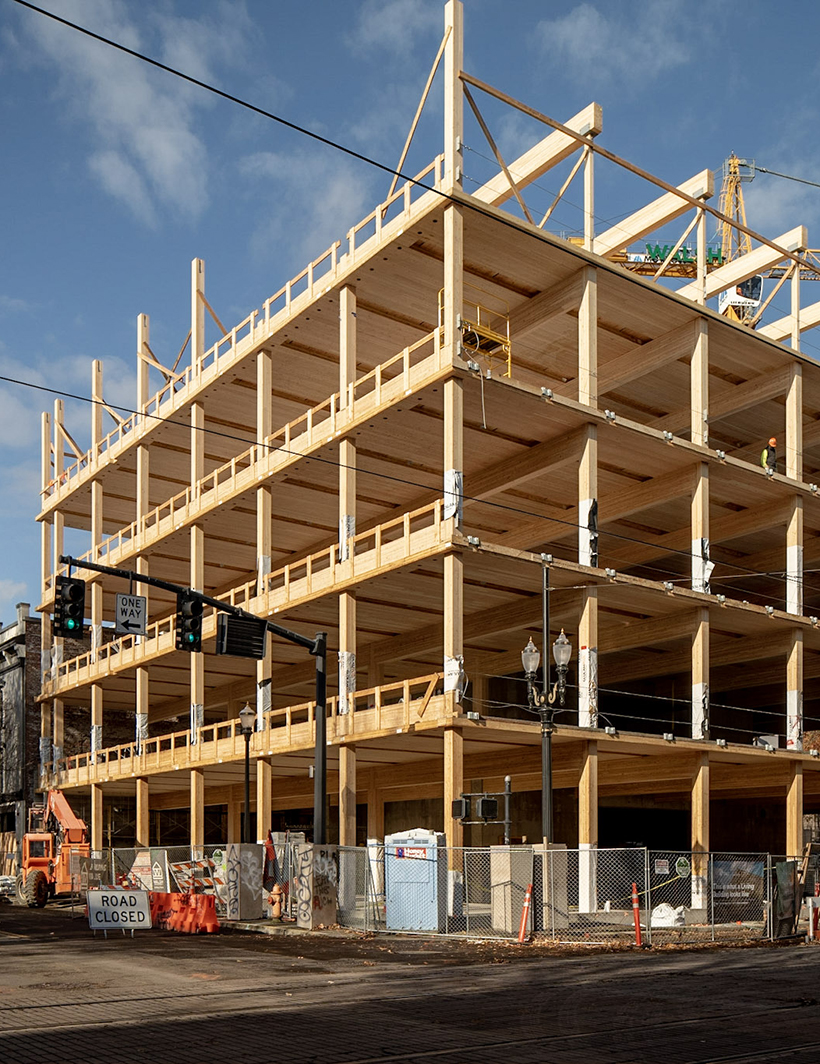 Engineered to stand for 500 years, with its systems expected to carry on following a Cascadia subduction zone-level seismic event. A Level IV Essential Facility, the PAE Living Building adheres to the same level that fire stations and hospitals comply with, while keeping all embodied carbon intact. KPFF’s seismic design included a structure formed from cross-laminated timber panels and heavy glulam structural columns and beams. Concrete shear walls and additional reinforcement resulted in an extremely sturdy structure that won’t sway as much at the roof level compared to standard office buildings. The sustainable building is designed to collect and treat 100 percent of its stormwater on-site. The self-contained system collects rainwater from the roof: an NSF-certified membrane is used, and a parapet serves as a basin. Rainwater travels through pipes rated for potable water to the building.The PAE Living Building is an example of where the design and construction industry is heading for the future.

The LBC’s environmentally friendly materials imperative, which prohibits the “Red List” of banned ingredients, led to breakthroughs in sustainable building technology, such as the development of an alternative coating for aluminum and a durable roof membrane that safely collects the rainwater supply for the potable-water treatment system. The team also took care to procure 100% Forest Stewardship Council wood, as well as wood-veneer doors that are fire-rated. The office building is engineered beyond code minimums for hospital-level seismic resilience. The heavily reinforced shear-wall core, surrounded by glue-laminated timber (glulam) columns and beams and concrete-topped cross-laminated timber (CLT) floor diaphragms, is supported on a mat foundation placed on aggregate pier ground improvements.

PAE uses 73% less energy than a typical office building and produces 105% of its total energy needs, some of which is generated by the building’s rooftop solar panels. However, the building does not have enough roof space for the amount of solar array needed, and historic-district rules prohibit roof overhangs, making it impossible to meet the net-positive energy imperative onsite. To solve this problem, PAE’s core group took advantage of a 2018 LBC offsite power generation exception, intended to encourage Living Buildings in dense urban settings, by funding a power array on the nearby Renaissance Commons affordable housing that would count toward PAE’s net-positive energy. This offsite array encourages neighborhood renewable power and fills the LBC equity obligation, which requires the team to donate half a cent or more of every dollar spent on the project to a charity or to ILFI’s Living Equity Exchange Program.

The PAE Living Building points toward the future of the design and construction industries, serving as a model that future urban Living Building project teams can replicate and adapt as needed.